Today would have been W E B Du Bois` birthday (he was born 23 February 1868), so this seems a good opportunity to share some current news which I`m sure would meet with his approval.

Firstly, the NAACP is marking 100 years of the NAACP and The Crisis, so Crisis Publishing and Gibbs Smith Publishing have teamed up to produce a new book, `NAACP 100 - Celebrating A Century ; 100 Years In Pictures`. The book is currently available, and can be ordered via the NAACP website, or contact Kim Eddy at keddy@gibbs-smith.com for more information.

Secondly, Du Bois biographer David Levering Lewis has co-edited (along with Michael Nash and Daniel Leab) a volume entitled Red Activists and Black Freedom, about James and Esther Jackson, close friends of both Du Bois and Robeson during the `50s. The book,  which was launched during January of this year,  arose from a symposium during 2006 entitled `James and Esther Jackson ; The American Left and the Origins of the Modern Civil Rights Movement`. Contributors include Tim Johnson, Maurice Jackson, Michael Anderson and Angela Davis. The book is published by Routledge.

Levering Lewis has been sharply critical  of some of the stances taken by Du Bois later in life, so this may seem a surprising project for him. However, I understand he has interviewed the Jacksons several times in the course of research for his books and believes that it is impossible to understand the Civil Rights Movement of the `60s without first understanding the pioneering work they undertook in the `30s. He is at pains to stress that the Civil Rights movement didn`t begin with Martin Luther King, it has a long history and is ongoing. Esther Jackson has commented that "the book would not have been possible" without Lewis. It`s interesting to note that the  launch of the book was attended by  Jarvis Tyner, once a key figure in the Committee to Defend Dr Du Bois.
Posted by Hoonaloon Collectables at 12:45 No comments: 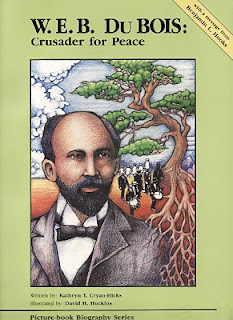 Kathryn T Cryan-Hicks (author) , David H Huckins (illustrator) - W E B Du Bois : Crusader for Peace - Discovery Enterprises, Lowell , Massacussets, 1991. In the Picture Book Biography Series. Contains a message from Benjamin L Hooks.
I make no apologies for including a book aimed at youngsters in this blog, particularly one as good as this !
Kathryn T Cryan-Hicks has a nice writing style, very clearly expressed, but still obviously well-researched and informative. There is no sense of her `dumbing down` for a younger audience. Interestingly, I notice at the front of the book, under the heading A Word on the Literature, a few suggestions on further reading for adults interested in Du Bois. I have to say her selections are very good and include some I would have mentioned myself ( Shirley Graham Du Bois - His Day is Marching On, Manning Marable - W E B Du Bois : Black Radical Democrat, Mark Stafford - W E B Du Bois : Scholar and Activist).
The book is enhanced by a number of excellent full-page colour illustrations by David H Huckins. These are done to a high standard and the images complement Ms Cryan-Hicks` words nicely.
It`s interesting to see how the use of simple words can actually be more effective than a heavily embellished style ;
"Some people said W E B Du Bois was ahead of his time. They called him a prophet because he saw things that others didn`t see. One thing is evident. While other people hid from the world, afraid of different cultures, different ideologies, Du Bois was not afraid to seek the truth, and to look it squarely in the face. He was not afraid to act upon his new insights and to discard ill-fitting philosophies. His life manifested this search to understand people and the world, and to find a way for all people to live together peacefully."
A pretty good epitaph I should say !
NOTES - A bit of googling has produced the fact that Kathryn T Cryan-Hicks is Assistant Director of Programs and Community relations at Chelmsford Public Library (Chelmsford, Massachusetts, not Chelmsford, UK) and a member of Chelmsford Climate Action Network ( http://www.chelmsfordcan.org/ ) . I didn`t find anything about David H Huckins other than a passing reference which seemed to indicate a connection with the world of music. I had little luck finding out more about Discovery Enterprises, though I note they did publish a series called Perspectives on History which included one called The Lowell Mill Girls : Life in the Factory by Jo Anne B Weisman which I thought sounded interesting. In addition to his many other activities, Benjamin L Hooks has been a lawyer, a businessman, a Baptist Minister and was Executive Director of the NAACP from 1977 - 1993.  He is founder of the Benjamin L Hooks Institute for Social Change.
Posted by Hoonaloon Collectables at 11:41 No comments: