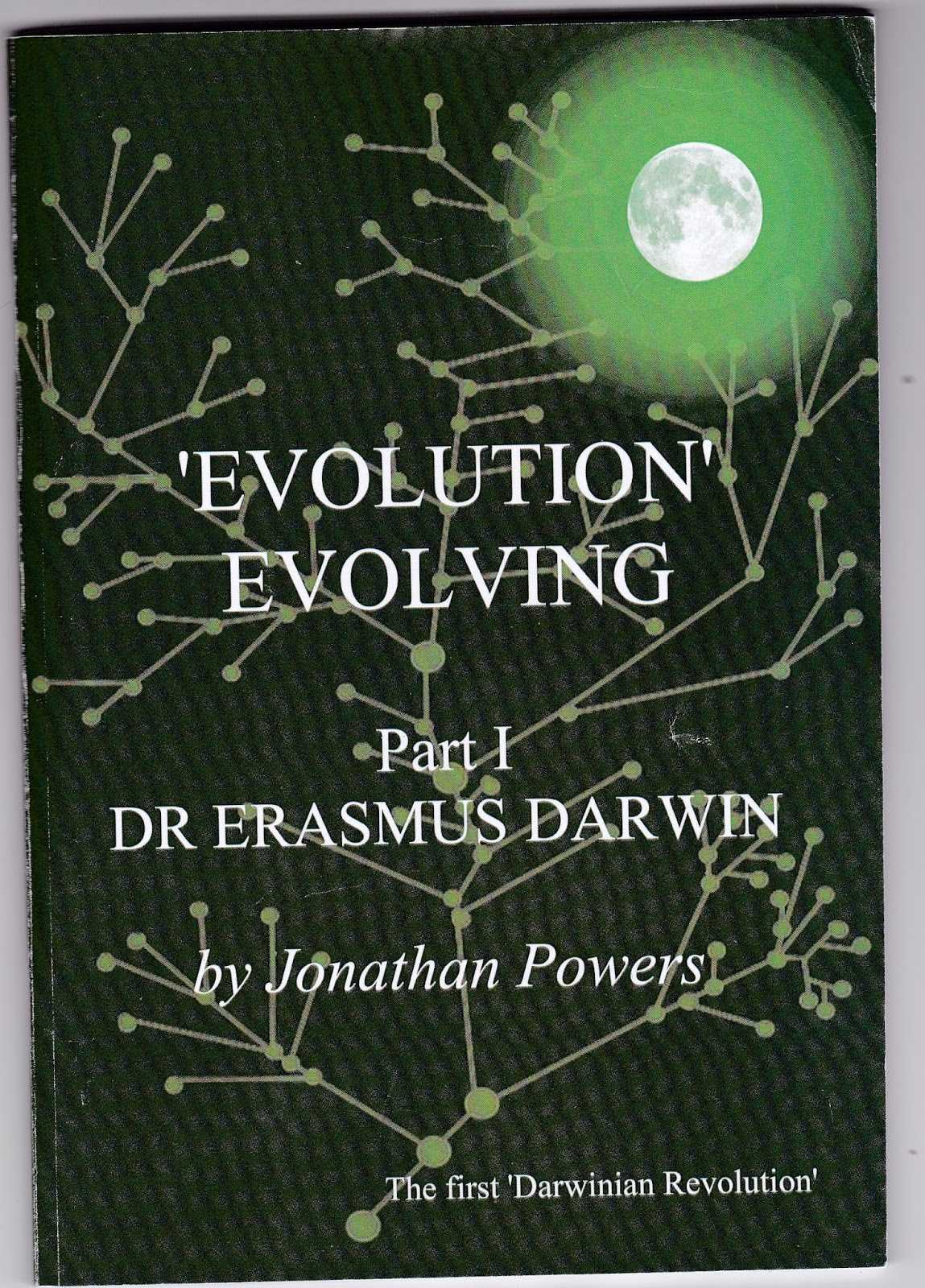 Jonathan Powers - Evolving Evolution ; Part One - Dr Erasmus Darwin - iOpening Books, 2013
Dr Erasmus Darwin (1731 - 1802) was grandfather of Charles Darwin and, as the author explains, "articulated his own evolutionary worldview" before his grandson published On the Origin of Species in 1859.
Erasmus was not the only early evolutionist to have links to Derby as Robert Waring Darwin and Herbert Spencer were also "linked to the same Midlands industrial town".
The author agrees with Paul Elliott that "this `evolutionary perspective` .. was a by-product of the belief in technological progress which accompanied the early industrial revolution - spreading from centres such as Derby, the Derwent Valley and Coalbrookdale to what became the great manufacturing centres of the Midlands and the North." He goes on to argue that "this perspective also influenced the character of their evolutionary views which...were distinctly and unrepentantly progressivist."
The author is at pains to put Darwin into context and spends some time explaining how Darwins` idea fitted in with, or differed from, his philosophical forebears, going back at some points as far as Hippocrates and Aristotle. I believe this is useful, though once or twice I did feel we might be getting too much of a good thing.
Looking at the changing times in which Darwin lived, Mr Powers emphasises the social changes engendered by the Industrial Revolution. He points out that in the Middle Ages "it was enturely natural to see everything, as well as everyone, as having been planned to fit into their `proper places`", but argues that "the rise of a `merchant class` and the development of a Market Economy...began to destabilise the assumptions of the old order."
He points out that Darwin did not see his `evolutionism` as working against (his version of) Christianity, believing in a deity he variously referred to as The Great Architect, The Cause of Causes and his "celestial guide".
Frequent use is made of quotations from Darwins` poetry and while it`s not to my taste, I think it is useful to have these.
It is outside the scope of this review to discuss all the issues and ideas contained in this booklet so I shall content myself with the observation that Erasmus Darwin was no numpty and neither is Jonathan Powers.
We turn now to reactions to Darwins` beliefs. The most significant of these came when Darwin and like-minded bods formed a group called the Derby Society for Political Information. In the great tradition of these things they  held meetings on licensed premises and eventually produced their `manifesto`, a broadsheet addressed "To the Friends of Free Enquiry and the General Good`. Initially this was not deemed controversial and indeed it was published in the Chester Chronicle with accompanying editorial comment endorsing its` "genuine sentiments of freedom, liberality and truth" which the writer believed would be welcomed by "every friend to the happiness and prosperity of the people".
The document appears to have been a philosophical treatise on the nature and purposes of `true government`. While it did accuse the British Government of "deep and alarming abuses" it was careful to qualify this with the observations that "our situation is comfortable, compared with that of many European kingdoms" and that "as the times are in some degree moderate, they ought to be free from riot and confusion". However, the closing paragraph, which invited "friends of freedom...to form similar societies and to act with unanimity and firmness till the people be too wise to be imposed upon" was treated by the authorities as an incitement to rebellion. In truth, the aim of the signatories was only that their followers should seek  "influence in the government"..."commensurate with their dignity and importance". So, campaigners seeking to bring pressuere to bear on  government rather than revolutionaries seeking to overthrow it.
They lived in turbulent times, however. Darwin, a Republican, had initially welcomed the French Revolution, and had twice turned down the chance to become the King`s Personal Physician. Some reaction was probably inevitable.
When the Morning Chronicle  published the Derby Societys` declaration both the publisher and printer were arrested for spreading "seditious libel".
In a comparable case the previous year Thomas Muir, an Edinburgh lawyer, had been transported to Botany Bay for 14 years when charged with sedition. These defendants were  more fortunate. The jury initially attempted to mitigate the offence by delvering a verdict that they were guilty of publishing the material in question but "without malicious intent." The judge rejected their verdict as invalid, only to have them return a second verdict of `Not Guilty."
Although Mr P does not mention it, the case anticipated in many ways the 1794 Treason Trials ( http://en.wikipedia/wiki.org1794_Treason_Trials/ ), a set of cases in which jurors rejected attempts to use the Courts to stifle debate. In my view, these are cases which should be more widely known, though I must admit I was unaware of them myself until a week or two ago !
All this and more is to be found in Mr P`s worthy tome. In places I personally felt there was a bit too much detail, but there again I`m probably a very different person to the author. Overall, I found it a satisfying read which only occasionally lapses into academic jargon.
More importantly, for me it brought to life a person from history who was previously just a name to me. I`m not sure where you can purchase a copy online - I like to think that is sold clandestinely, possibly in a plain wrapper, in secret hotbeds of latter-day radicalism located somewhere near Derby City Centre. That would be quite glamorous in it`s way.
If such networks are not available to you, there are a few of Jonathan Powers` I-Opening Booklets for sale in the gift shop at Derby Museum !
Posted by Hoonaloon Collectables at 02:58 No comments:

Yesterday was Action Mesothelioma Day here in the UK.
AMD is a day of events aimed at raising funds and/or awareness in relation to asbestos-related illness. I became interesed in the issue a few years ago when a friend of mine died as a result of exposure to asbestos whilst working for a roofing company and each yeasr I like to do my bit to publicise the event, usually by posting details at http://bookshelvesandbrownale.blogspot.com or elsewhere.  It`s not much, but it`s what I can do.
For details of this year`s events and actvities, contact Debbie Neale via http://www.mesothelioma.uk.com  .
I understand that one of the groups concerned has created a petition, which you can view at http://epetitions.direct.gov.uk/petitions/59014 . The petition, headed `Provision of Research Funding into Asbestos Related Diseases`  will be live until 9 January 2015.
If you want to sign the petition, all well and good. If you prefer to learn more about the subject, and/or about a few of the groups involved in this years` AMD, here are some links  ;
www.asbestossupport.co.uk
www.hasag.co.uk
http://www.hse.gov.uk/asbestos
Posted by Hoonaloon Collectables at 03:12 No comments: