W E B Du Bois died on 27 August 1963 and was buried on 29 August 1963. Immediately after his internment, a last message from him to the world was read to the mourners. Characteristically, he had actually composed this message during 1957 and had left it in safe-keeping until it was needed !

It is, in my view, a deeply positive message ;

"It is much more difficult in theory than actually to say the last good-bye to one`s loved ones and friends and to all the familiar things of this life.

I am going to take a long, deep and endless sleep. This is not a punishment but a privilege to which I have looked forward for years.

And that peace will be my applause.

One thing alone I charge you. As you live, believe in life ! Always human beings will live and progress to greater, broader and fuller life.

The only possible death is to lose belief in this truth simply because the great end comes slowly, because time is long.

W E B Du Bois on William Howard Melish  ;
"Howard Melish is on of the few Christian clergyman for whom I have the highest respect. Honest and conscientious, believing sincerely in much of the Christian dogma, which I reject, but working honestly and without hypocrisy, for the guidance of the young, for the uplift of the poor and ignorant, and for the betterment of his city and his country...Here is a young man of ideal character, of impeccable morals ; a hard worker, especially among the poor and unfortunate."
Melish, who tells his own story in a book, Strength for Struggle, was a priest who ran a church called Holy Trinity in Brooklyn Heights. W E B Du Bois lived nearby and it would seem Melish was a fairly regular visitor to the home of W E B and Shirley Graham Du Bois.
Melish seems to have held Communist political beliefs whilst remaining a Christian himself. I`m not in a position to comment on how he reconciled the two, or on his stances on particular issues, but it does seem clear that he was pro-Soviet (not just anti- the Cold War) at a very ugly time in Soviet history. Inevitably, he became the target of McCarthyite harassment which prevented many of his activities - moves to remove him from his Church went as far as the New York Supreme Court on two separate occasions -  but he continued to be involved in many issues, working with single mothers and later joining a Civil Rights organisation, the Southern Christian Leadership Conference.
Du Bois in the Autobiography portrays Melish as an earnest, hardworking priest persecuted because his church was attracting "workers and Negroes". Others have speculated that the chief persecutor of the Melishes, James P De Wolfe, had sectarian motives. Undoubtedly, the Rev Melish did much good in his life, but there seems little doubt that his political views were, to say the least, questionable. For myself I would hope that most people could recognise that he did a lot of good in his life, but let`s not pretend he was perfect ! 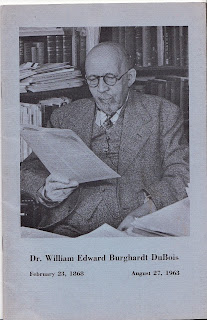 In September 1963, the Rev. Melish flew to Ghana to address a Memorial Service for Du Bois. On his return, he had cheaply produced booklets made up containing the text of his speech, which he apparently sold for small sums in the Brooklyn area to raise funds for his church. My copy was obtained fairly cheaply and from what I`ve seen, quite a few have survived to this day.
The Rev. Melish both opened and closed his address with quotes from a piece by Walt Whitman, a poet Du Bois admired.
The rest is an amiable enough trundle through the life of Du Bois, certainly worth a read.
I was  puzzled by a couple of references to incidents I don`t recall having seen mentioned elsewhere - one is a reference to hostility to research work done by Du Bois and
others in `Lownes` (Lowndes ?) County - "Du Bois and his team of investigators ...met resistance, harassment and shotgun blasts"  - and  the other concerns the Atlanta Riots, which he says left the first Mrs Du Bois "injured in a manner that contributed to her invalidism in later life" and refers to their daughter Yolande "hiding in a stair well". I`ve checked against the Autobiography and David Levering Lewis` Biography but cannot see any reference to these details, which I don`t recall having seen in any other books by/about Du Bois either. Maybe someone else can cast light on this ?
Elsewhere, he refers to Du Bois standing for public office later in life for the Progressive Party rather than the American Labor Party. I have been able to resolve this ; Aptheker in his notes to Against Racism states that the American Labor Party was a name used by the Progressive Party in New York only, so presumably that`s the explanation.
At the end of the booklet are a selection of tributes to Du Bois from various bodies, including the NAACP Board of Directors ( "His contributions to the ageless struggle for human rights were imperishable. His passage leaves a great void which there is no immediate prospect of filling." ), an interesting one from Madison S Jones at the New York Commission of Human Rights ( "I had the honor of working with him.. I am proud to say he gave me a great deal of counsel, advice and guidance...The world is better for his massive contribution towards freedom for all." ) and one from Malcolm Cowley, President of the National Institute of Arts and Letters ( "The Institute has lost the most distinguished member whose passing will be mourned by the world of letters" ).
As we approach another anniversary of the death of W E B Du Bois, it`s interesting to reflect on his long life, prolific writing career and dedication to progressive causes.
My intentions in running this blog are pretty basic. If I can demonstrate that it`s possible to build up an interesting Du Bois collection even if, like me, you`re perennially short of both time and money, and if I can encourage others - particularly the young - to take an interest in Du Bois` life and work, I`ll be happy.
On a slightly more ambitious note, I would hope it`s possible for people of goodwill to build on the positive aspects of Du Bois` work whilst accepting that he had flaws - we all have flaws, after all ! If I voice the odd criticism, that`s the reason.  At the end of the day,  uncritical appreciation is not appreciation at all !
Posted by Hoonaloon Collectables at 06:17 No comments: